The Constitution uses the term "Social Security" in four different provisions, although the most important, as we have already stated is Article 41. The second provision of interest is Article 149.1.17 which includes the basic legislation and the financial framework of the Social Security among the areas over which the state has exclusive power, without prejudice to the implementation of its services by the Autonomous Communities.

The third provision, Article 129.1, states that said legislation over which the state has power must provide for the methods through which the interested parties participate in the Social Security.

A fourth and final reference to the Social Security is included in Article 25.2 when, when referring to the right of a person sentenced to prison, it states that "in all cases, they shall be entitled to paid work and Social Security benefits".

But the provisions of the governing principles of the Social Security outlined by the Constitution are not limited to the four aforementioned articles, in which this term is used. Three other articles must also be mentioned: the family protection benefit (Article 39); health protection (Article 43), treatment and rehabilitation of physically disabled persons (Article 49); and financial sufficiency of citizens during old age, through adequate and periodically updated pensions (Article 50). All of these aspects are internationally
considered to be relevant to Social Security.

The constitutional mandate, included as one of the governing principles of social and economic policy, has been achieved through the enactment of the Non-Contributory Benefits Act, and thus the Social Security protection system has been definitively shaped by two modes or levels: the contributory and non-contributory levels.

Article 41 of the Spanish Constitution, when referring to the Social Security states that the public powers shall maintain a public Social Security system for all citizens, which guarantees sufficient social benefits and assistance in the face of situations of need, especially in the case of unemployment. Additional benefits and assistance will be optional.

In this way, the protective action of the Spanish Social Security system is currently based on a comprehensive and universal protection model that includes, pharmaceutical-health care, family protection, social services and, in certain cases, unemployment benefit.

All citizens can access this protection, under identical terms, irrespective of whether or not they have made contributions to the Social Security system and it is completed, on the one hand, by a financial benefits system which, in a harmonious and differentiated manner, is included in the contributory level, where incomes to replace the wages earned when working are provided (with proportionality between salary-contributions and benefits) and, on the other hand, by the non-contributory level, aimed at providing compensation income for basic needs to those citizens who, finding themselves in a situation of need, are unable to access the contributory mode.

In addition to these two public and compulsory levels there is a third level, which is optional and consists primarily of Social Welfare Organisations and Pension Funds. 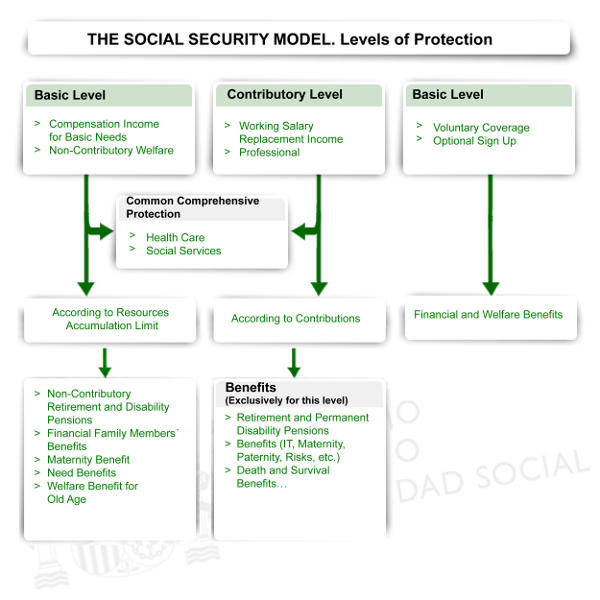